The Castlederg Water Treatment Works supplies 25 million litres of drinking water per day to 40,000 residents across the west of Northern Ireland, including Strabane and Omagh.

The upgrade to the structure and its water infrastructure system is estimated at £12 million. Such a complex project requires careful coordination and efficiency. To ensure accurate completion of the project, Lowry Building & Civil Engineering turned to Topcon Positioning Ireland technologies.

Lowry Building & Civil Engineering has been appointed by Northern Ireland Water to build reinforced concrete walls that, once the project is complete, will sit between huge underground water storage tanks. The walls will ultimately secure the tanks, while also providing the foundation for the building above, so precision is vital.

To ensure the works are carried out accurately, Lowry Building & Civil Engineering has turned to Topcon Positioning Ireland’s GT-605 Total Station for setting out. The team is using the technology as part of the verification process, setting out vertical points with measurements taken using the GT- 605’s reflectorless high speed EDM.

The same technology was also used to re-section the instrument using retro targets as control stations. Previously, tasks like this would have been carried out by an engineer walking to each of the ground control markers to take measurements. The Topcon GT-605 saves the team time. In fact, Lowry Building & Civil Engineering have reported time savings of up to 10 minutes every time this task is carried out, equaling up to an hour of saved time each day.

Jack Lowry, Junior Engineer at Lowry Building & Civil Engineering, explained: “We’ve used Topcon technologies for some years now, particularly the LN-100 for foundation works so we appreciate the level of accuracy they provide. For this project, we needed to find a solution that was reliable and precise when setting out vertical construction parameters. With the trust we have in the LN-100 and the ease of use of Topcon systems, which the team loves, we decided to invest in the GT-605.

“We needed to ensure we were working within just millimetres of accuracy and the GT-605 is delivering that consistently. We’ve used around 400 tonnes of steel and 1,200 cubic metres of concrete on the project to date, which is the equivalent to around half of the volume of an Olympic-sized swimming pool, so the potential risk of time and material wastage if something were to go wrong or needed to be re-done could be catastrophic for us. With the GT-605, we’re eliminating that risk.”

The Lowry Building & Civil Engineering team has also used Topcon’s MAGNET Field on the project. MAGNET Field runs on a Topcon FC-6000 Field Controller, which allows the user to take project data directly to site as it is a full Windows Tablet. This gives the team the ability to set out directly from a 3D drawing and collect accurate 3D data on site for as-builts, eliminating the requirement to go back and forth to the office for co-ordinates on paper drawings. Instead, the information is already on the logger in front of them.

The technology is also saving time on site as the points and linework of a drawing can be set out in the ‘map view screen’ on the FC-6000’s touchscreen, and gives users the ability to stake reinforced concrete wall lines from the 3D drawing using reflectorless measurements to ensure accuracy.

Simon Crowhen, Sales Manager for Geopositioning at Topcon Positioning Ireland, said: “We’re delighted to be part of the Castlederg water treatment works upgrade. The GT-605 system and MAGNET Field software have been designed to streamline projects and accelerate productivity, efficiency, and accuracy. This project is a fantastic example of what can be achieved using Topcon technologies and the motivation from Lowry Building & Civil Engineering to upgrade from the LN-100 system ensured the team remains one step ahead. It has also paid off in upskilling the team and delivering a large-scale project successfully.”

Jack concluded: “Successfully delivering one of the biggest projects in the west of Ireland, especially the vertical construction side of things, would have been near impossible without Topcon technology – we’d have needed to hire a freelance team to carry out the works, which is both costly and time consuming.

“When we invested in the GT-605, a Topcon representative came to site and hosted a full training day with our engineers, so we’ve been able to upskill our team and carry out the work ourselves. We definitely wouldn’t go back to working without it.”

The project is due to be completed in March 2023. 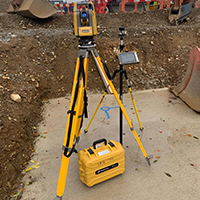 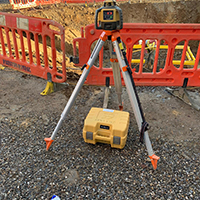 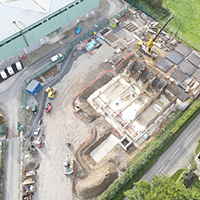 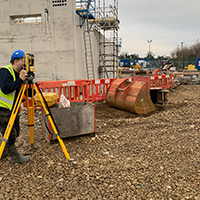 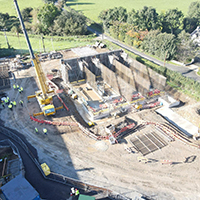